The people in Boise are incredibly nice and welcoming. In other words, “there’s nice and there’s Boise nice.”

Boise Nice means: we want you to feel you belong here and have a stake in the well-being of your community. You hear it when two strangers strike up a conversation as they wait in line at the grocery store. You see it when drivers stop to let pedestrians and cyclists cross streets safely. You feel it when new friends reach out with unexpected invitations for a hike, a BBQ or a concert. 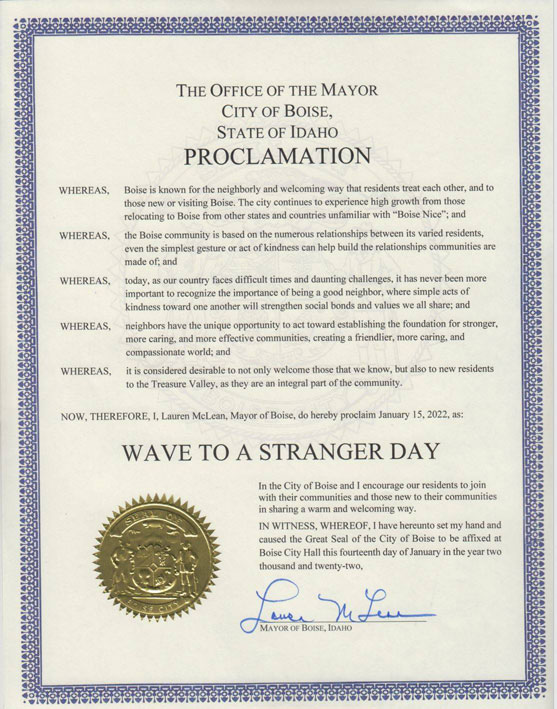 Boise Mayor Lauren McLean proclaimed January 15, 2022, as “Wave to a Stranger Day”, where all Idahoans were encouraged to wave to a stranger! Boise Nice Project President Rourke O’Brien noted that Boise is known for the neighborly and welcoming way that residents treat both each other, and strangers. The city has recently experienced high growth from those choosing to relocate to Boise. Those unfamiliar with “Boise Nice” had a chance to give it a try. Billboards were placed around Boise, with Jump displaying people waving on the JUMPotron Jan.15, as well as the Boise Chamber displaying the news also on their screen.

For many long-time residents this was a day unlike any other but some of us newcomers aren’t as familiar with this common practice. Boise Nice – yeah, it’s a thing!

Recent posts
From the gallery